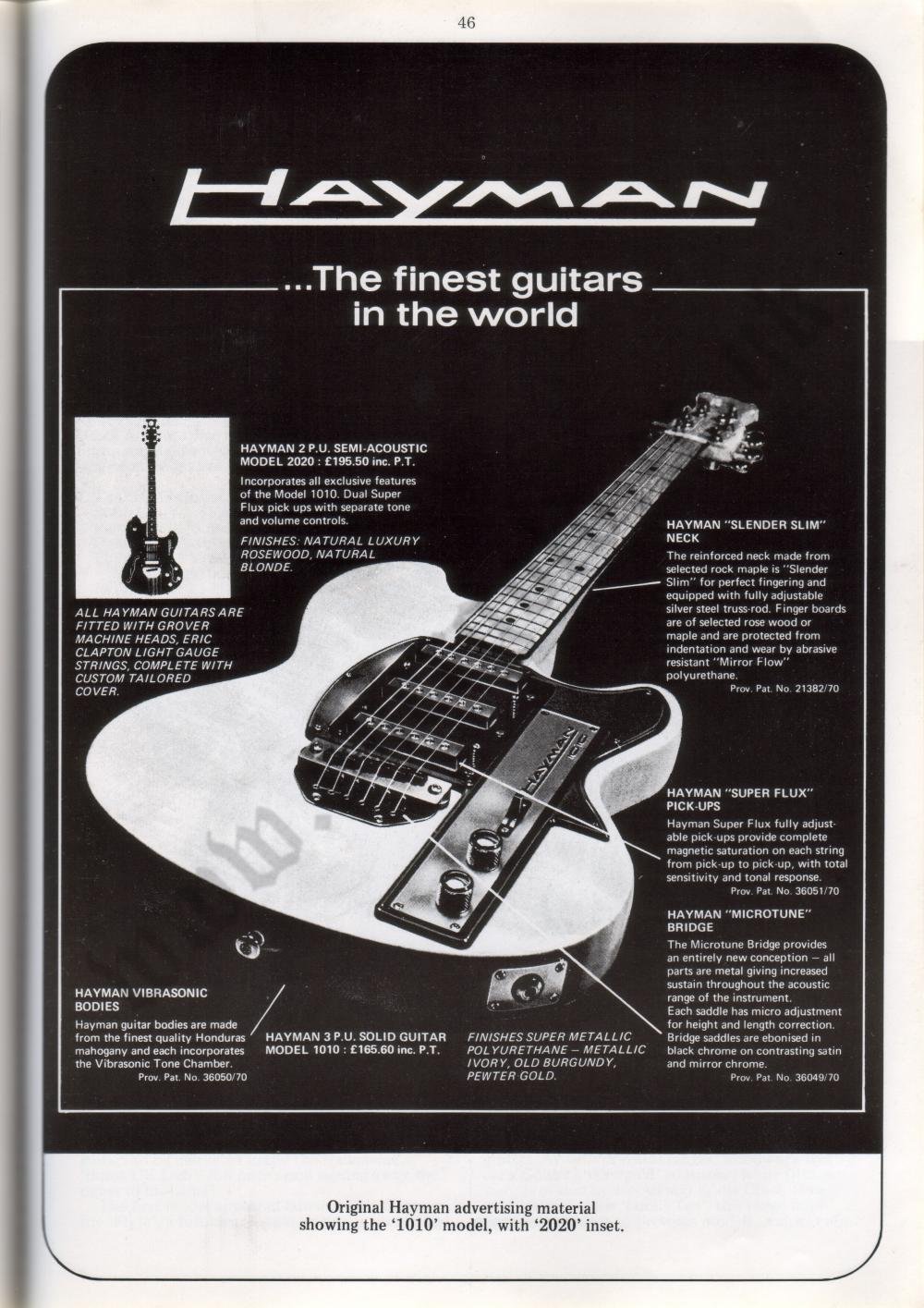 In 1969 Jim Burns joined ex-Vox employee Bob Pearson to develop a new range of HAYMAN guitars for the Dallas Arbiter organisation. Jim had already formulated some ideas for a new design, as had Bob Pearson, who had also been working on a perspex-body guitar with Beatle, John Lennon. The resultant combination of Jim and Bob's ideas produced a range of instruments with several innovative features and distinctive appearance. The guitar styling, suggestive of a Burns 'Vista Sonic' crossed with a Fender 'Telecaster', was still very 'British'. The designs incorporated many characteristics of the earlier Burns models, so retaining a definite 'family likeness'; the woodwork was by Jack Golder, with truss-rod design by Norman Houlder. Re-An supplied the fittings while the finish was by Derek Adams, these all being links with the previous Burns and Baldwin instruments. The Hayman range can certainly be classed as 'Burns by another name'. All models were worthy successors to previous Burns instruments, if lacking a little of their predecessor's 'flair' and 'character'.

The talented partnership of Jim Burns and Bob Pearson came to an end in September 1971, when Jim decided to leave the Dallas Arbiter company. Bob Pearson continued to develop new ideas and additions to the range, and later versions of the original four models featured the new Re-An humbucker type pick-ups. When Hayman came to an untimely end Bob, Jack Golder and Norman Houlder, left 'high and dry' by the Dallas Arbiter collapse, culminating in a Warehouse fire circa Christmas 1974, decided to 'soldier on' and produce their own 'Shergold' instruments 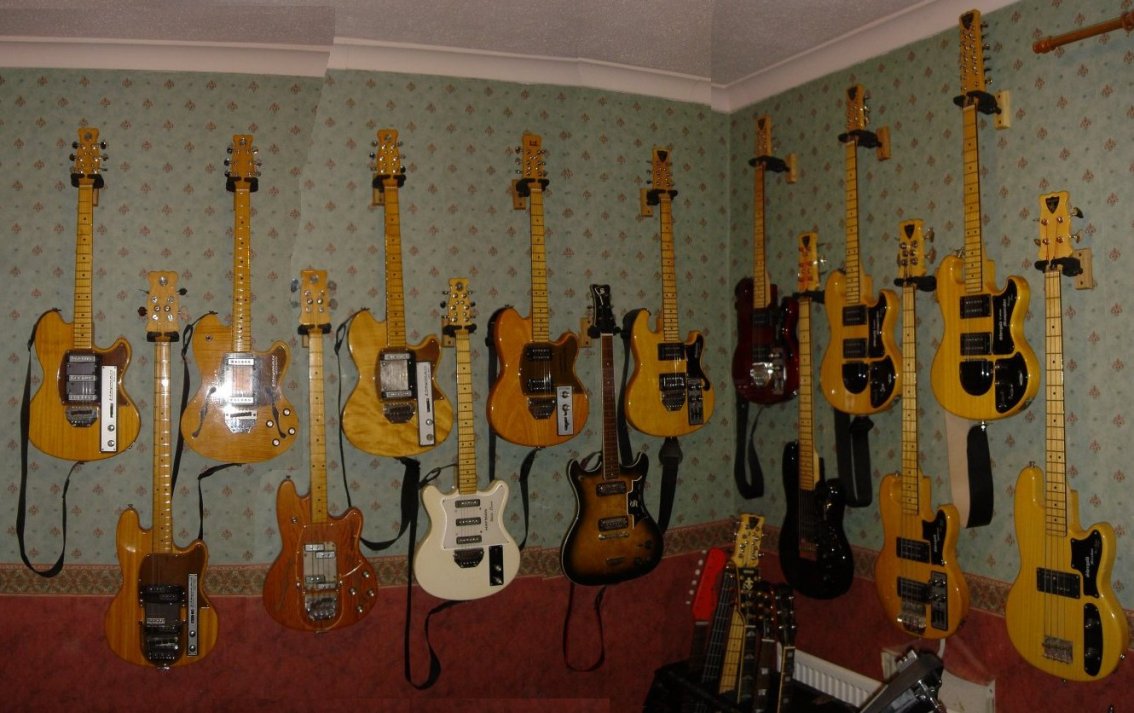 Early bodies were of Honduras mahogany, later sycamore or obeche

Grover machine heads were fitted as standard (except for Comet) 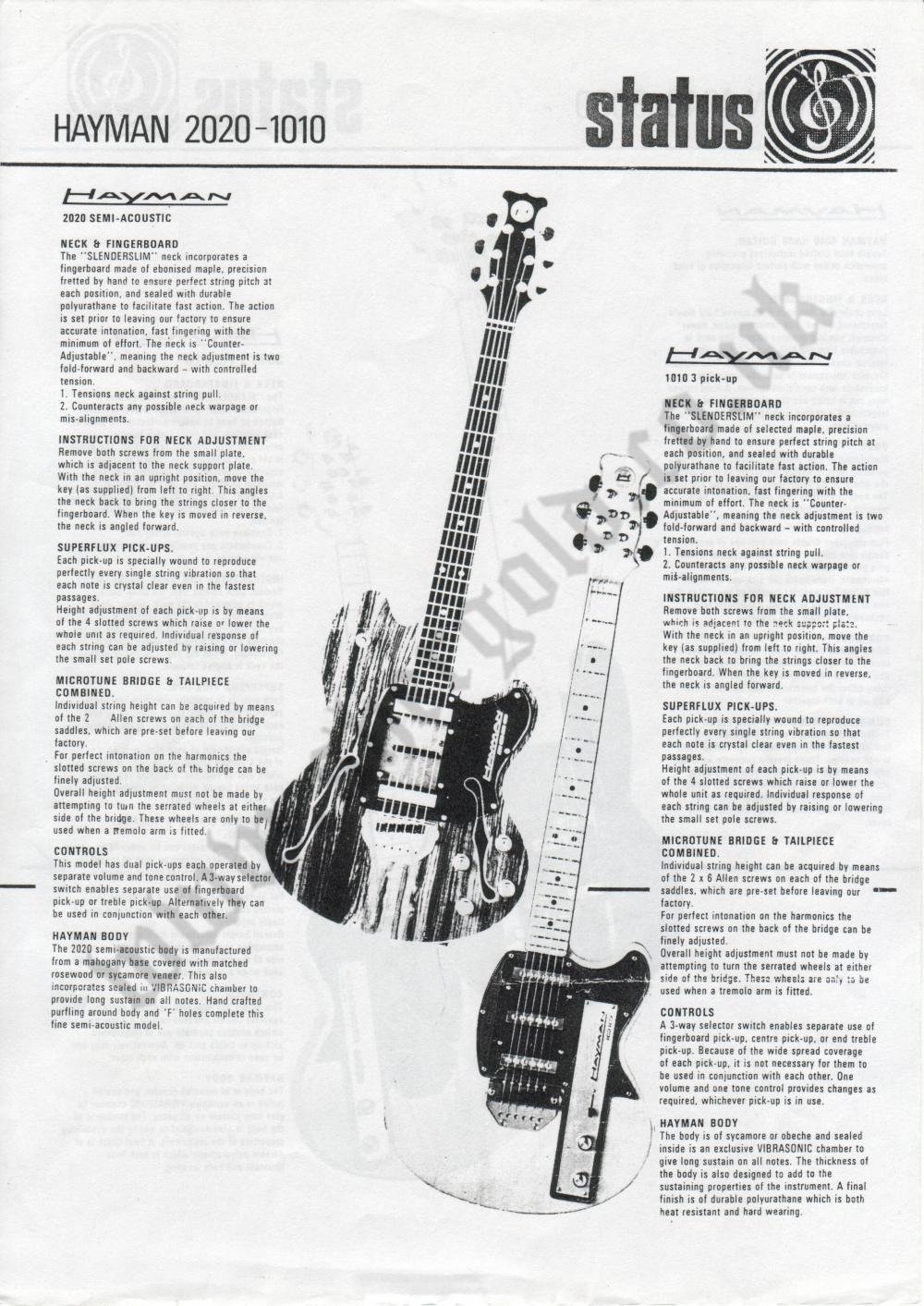 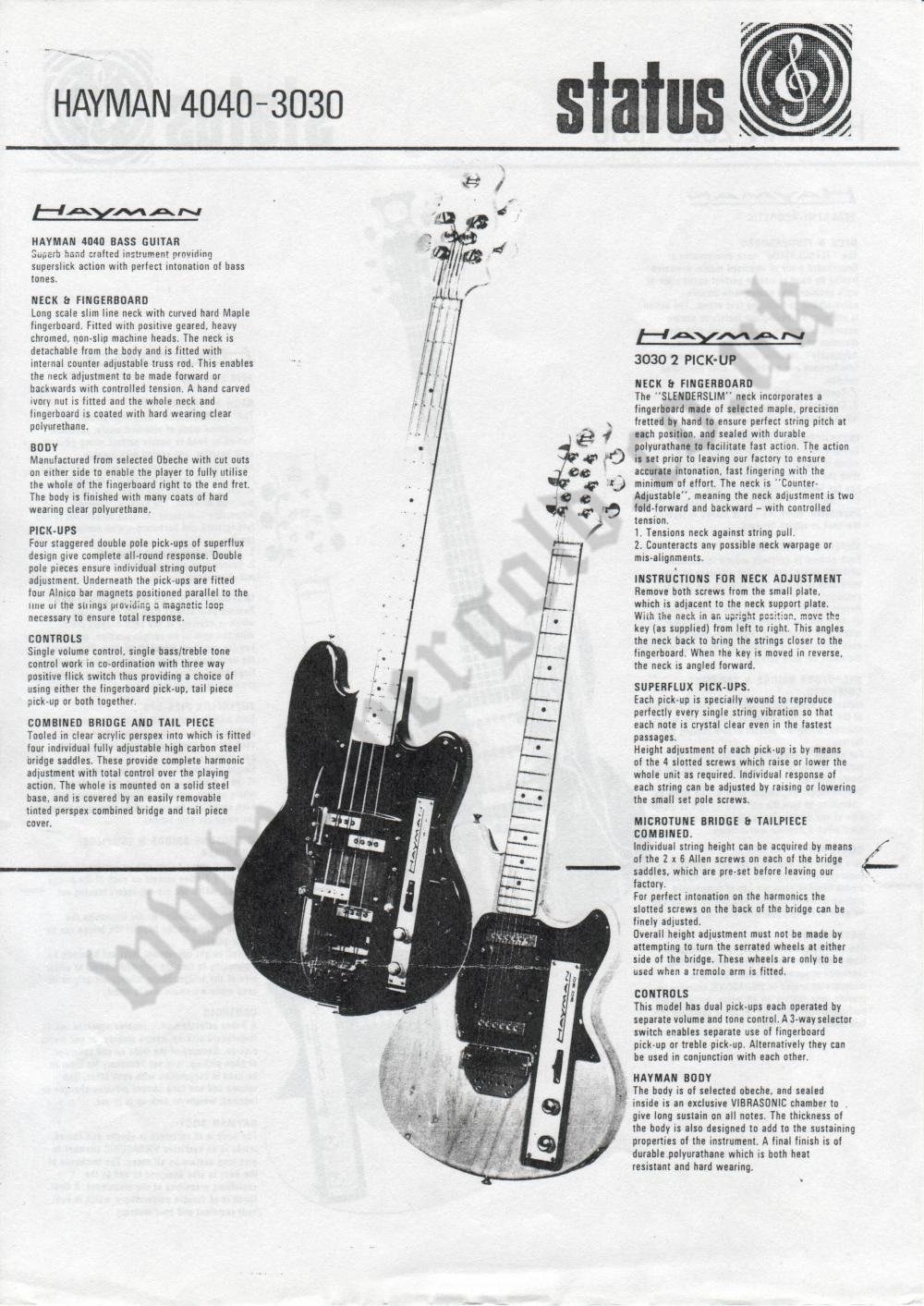 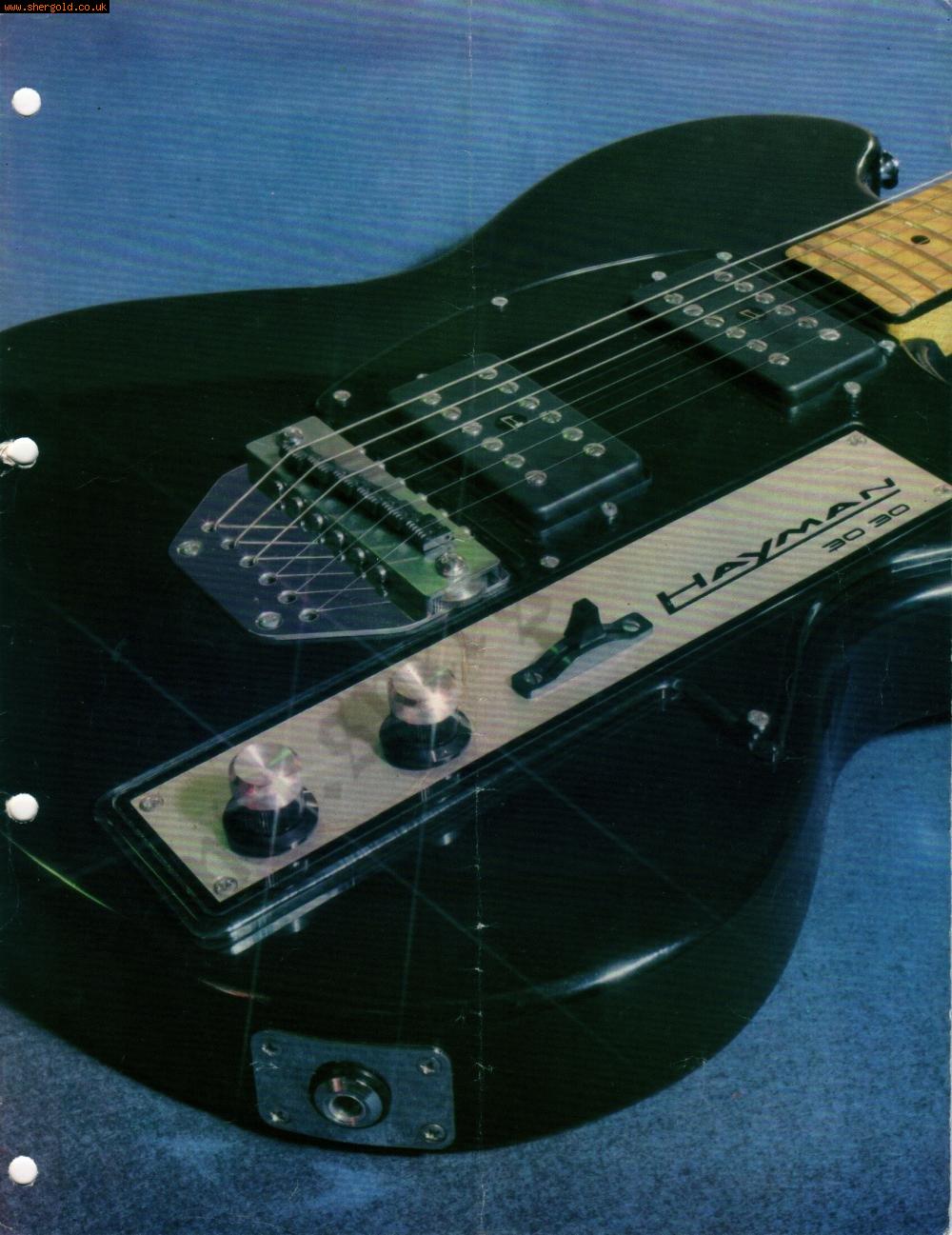 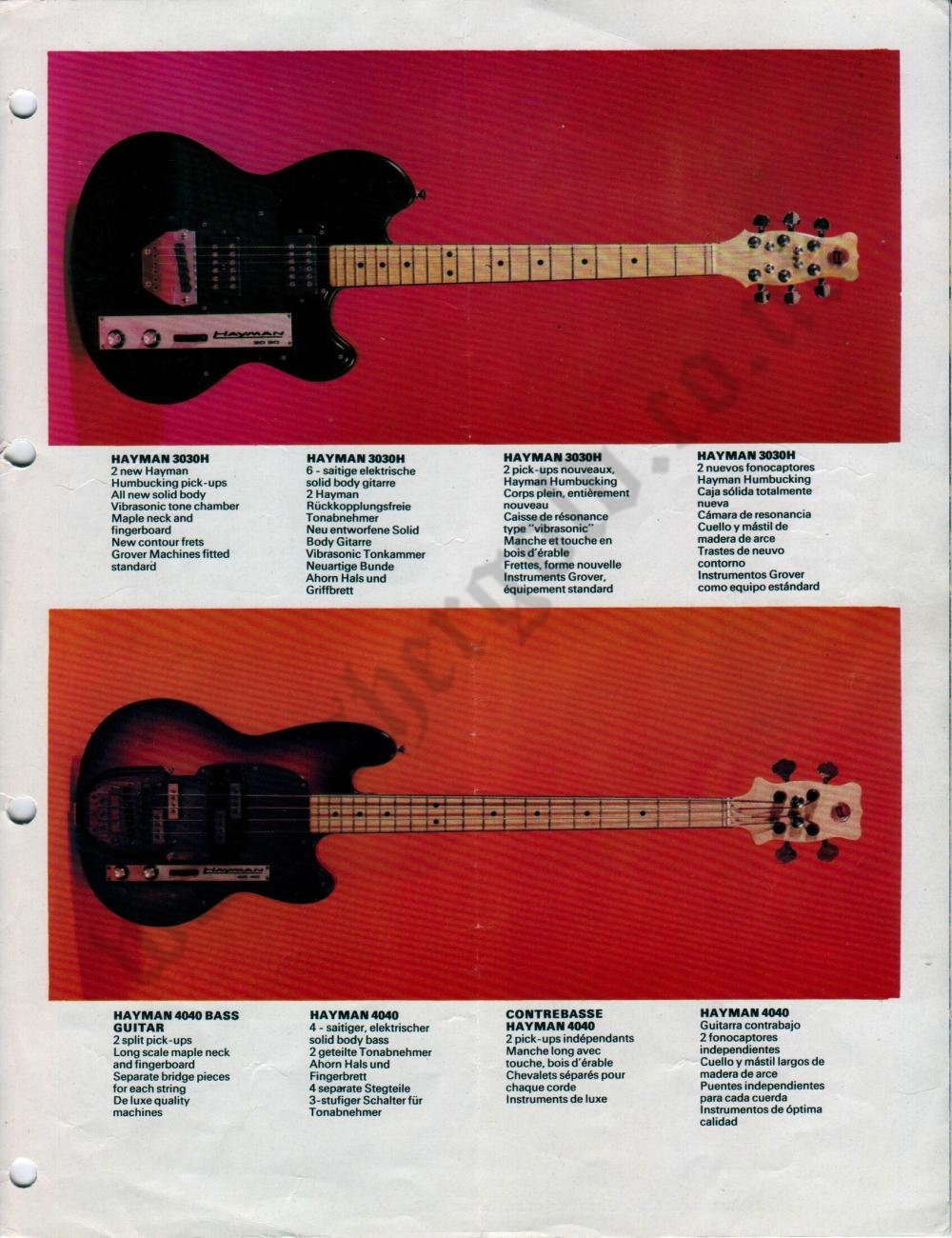 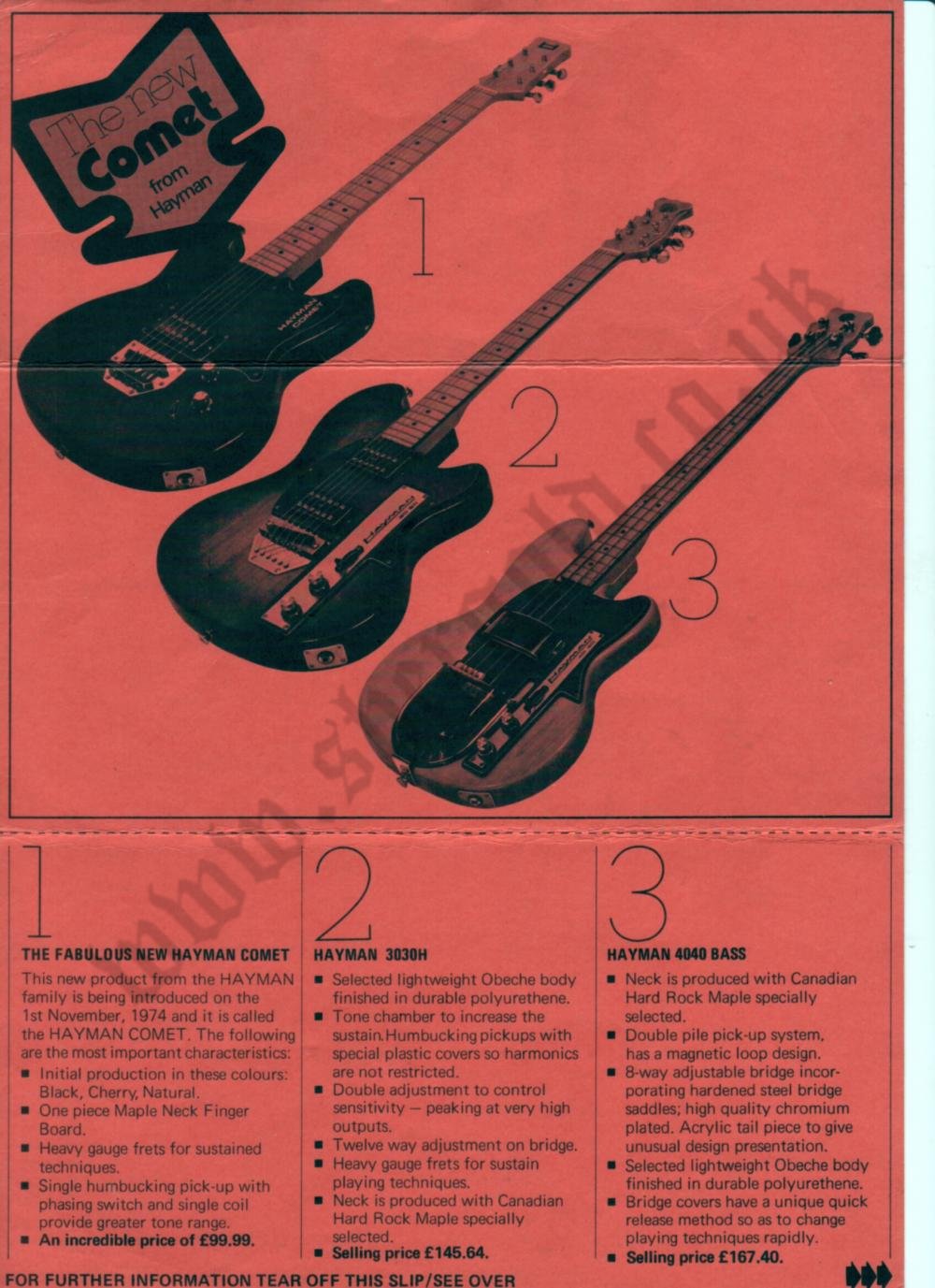 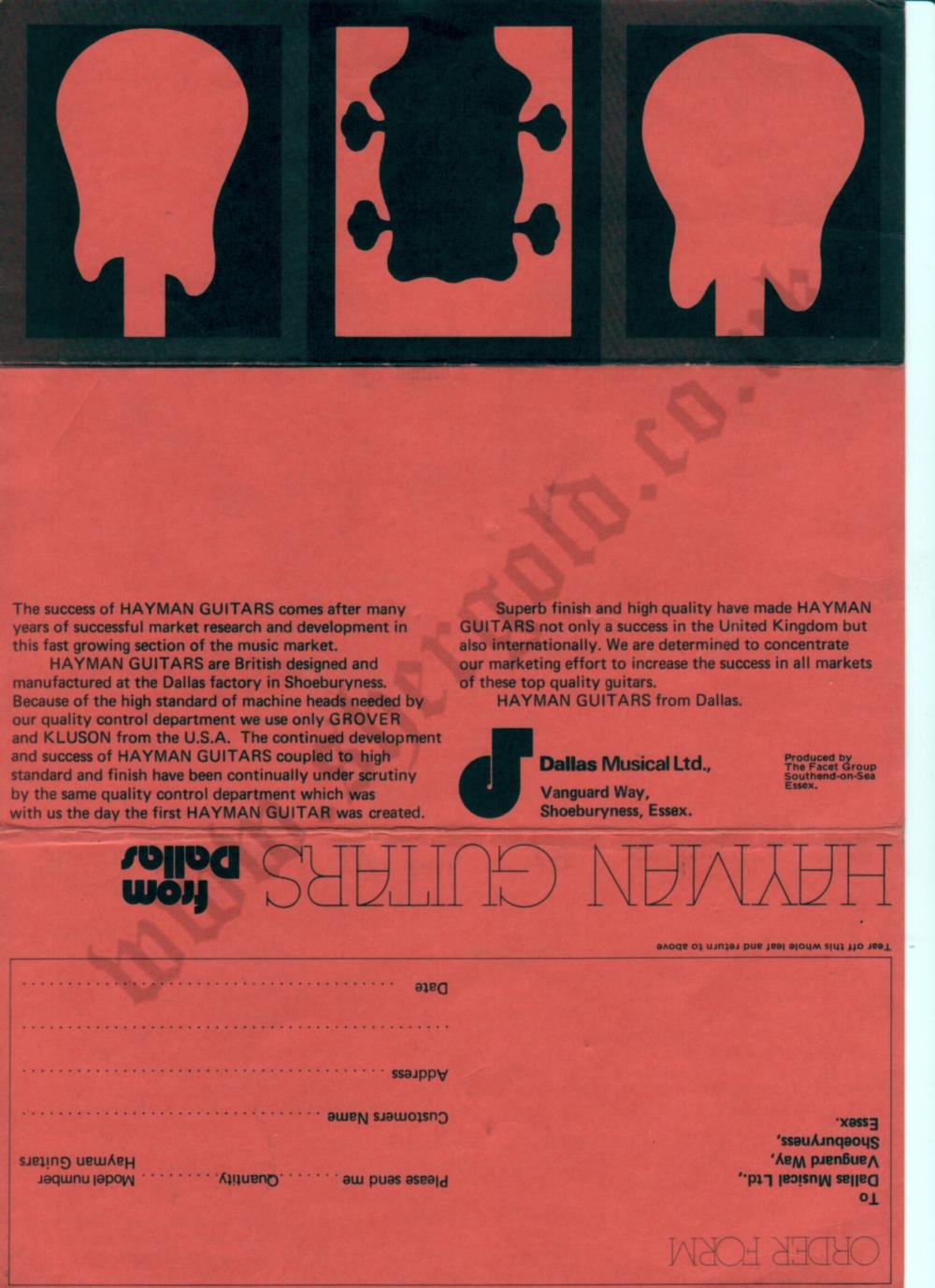 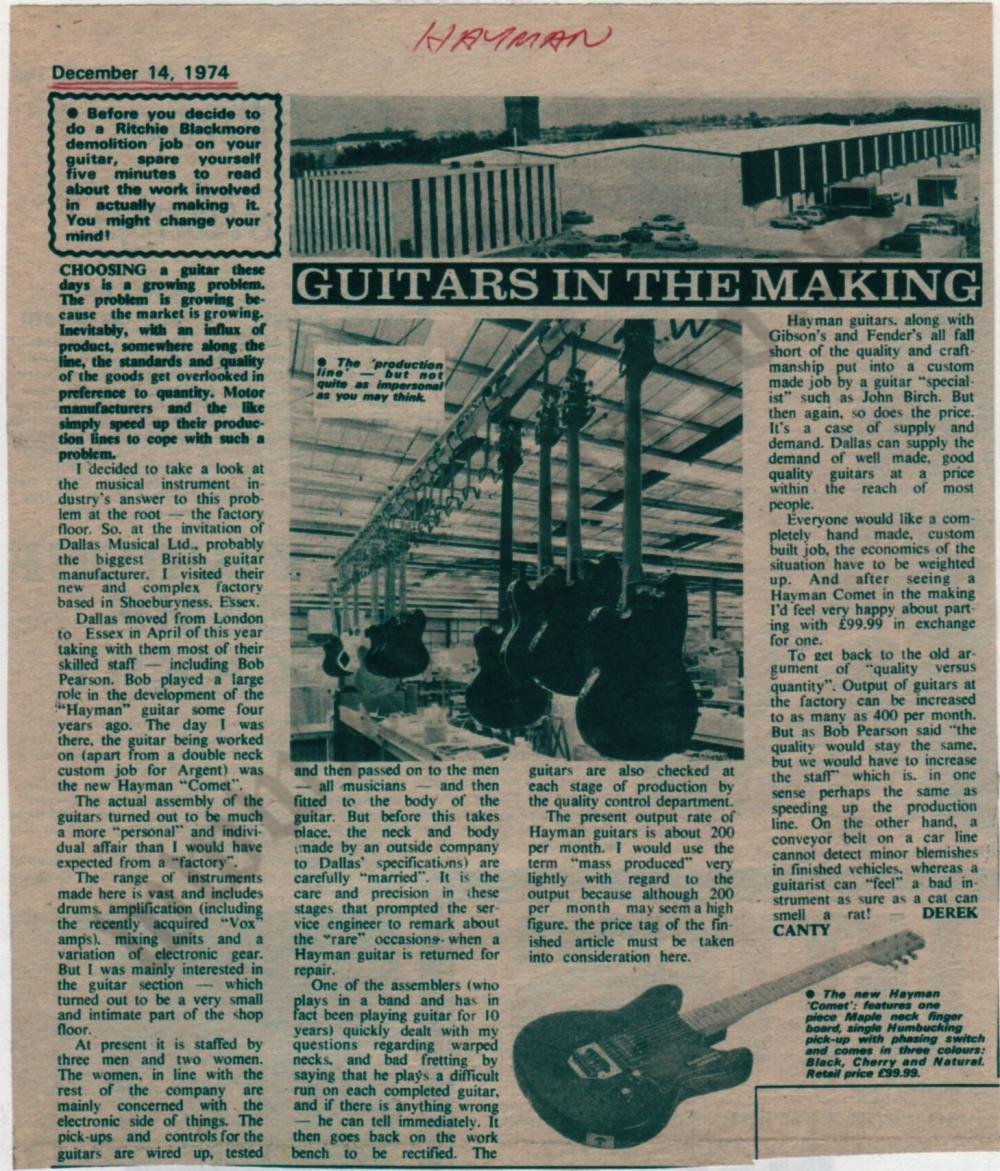 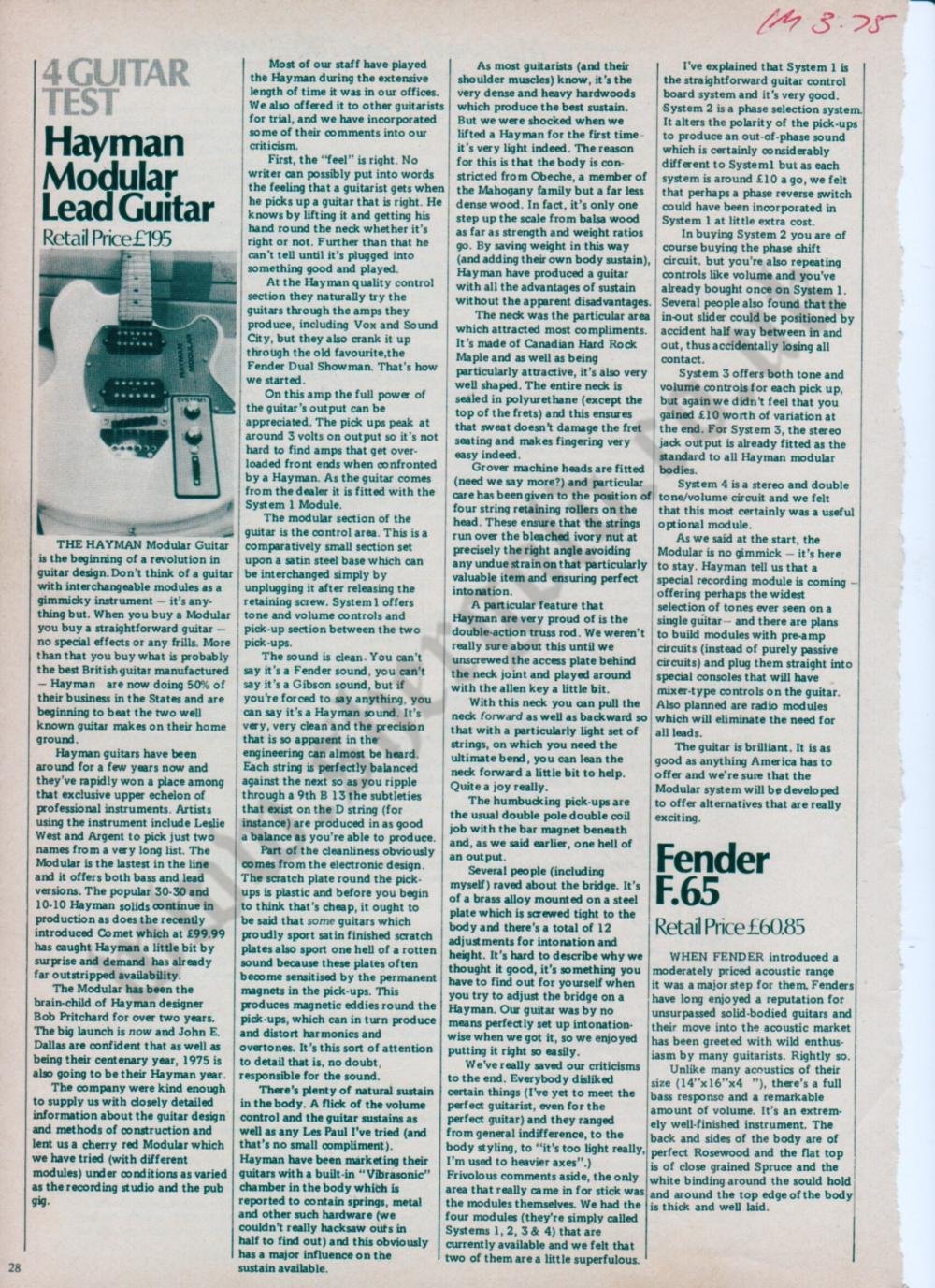 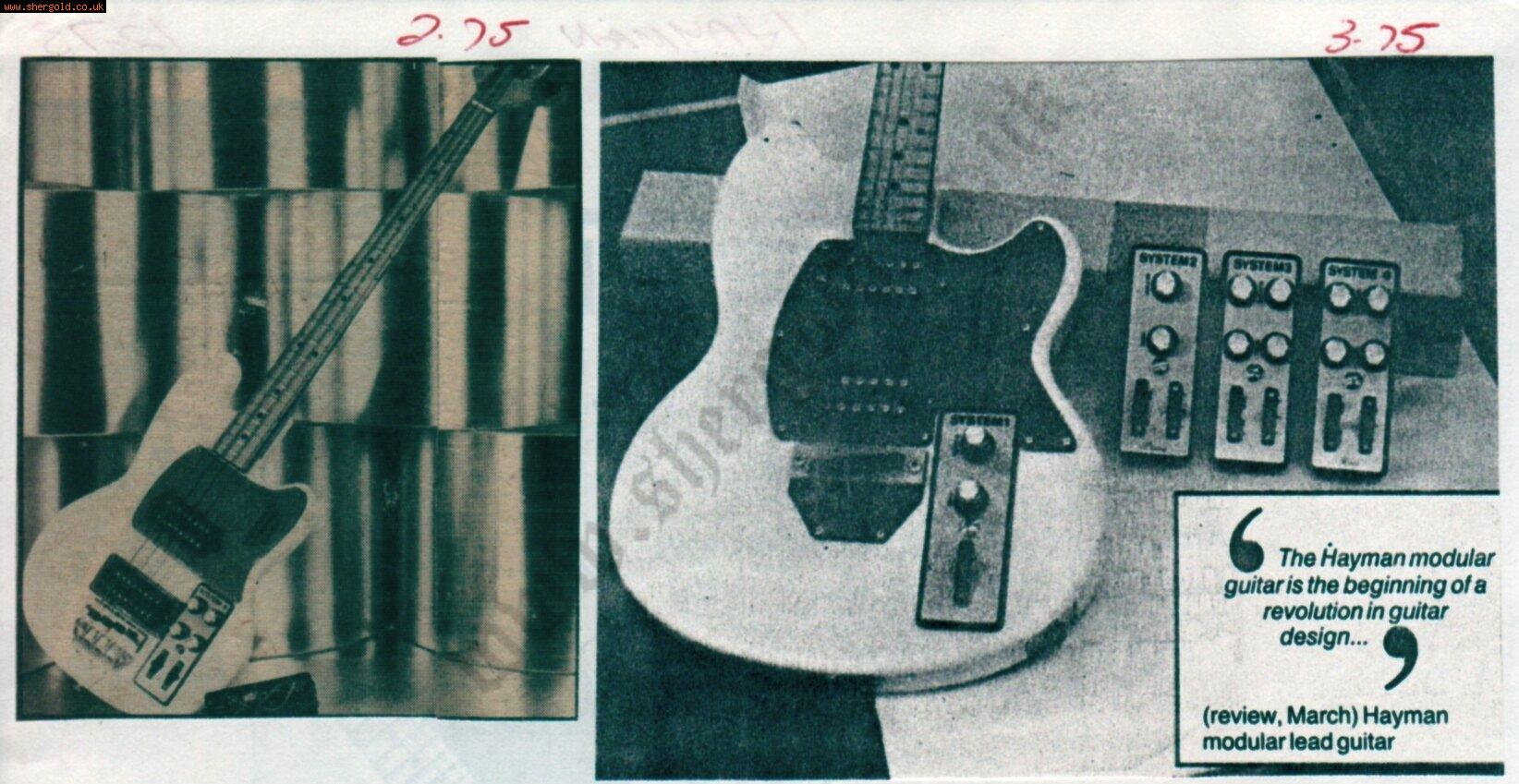 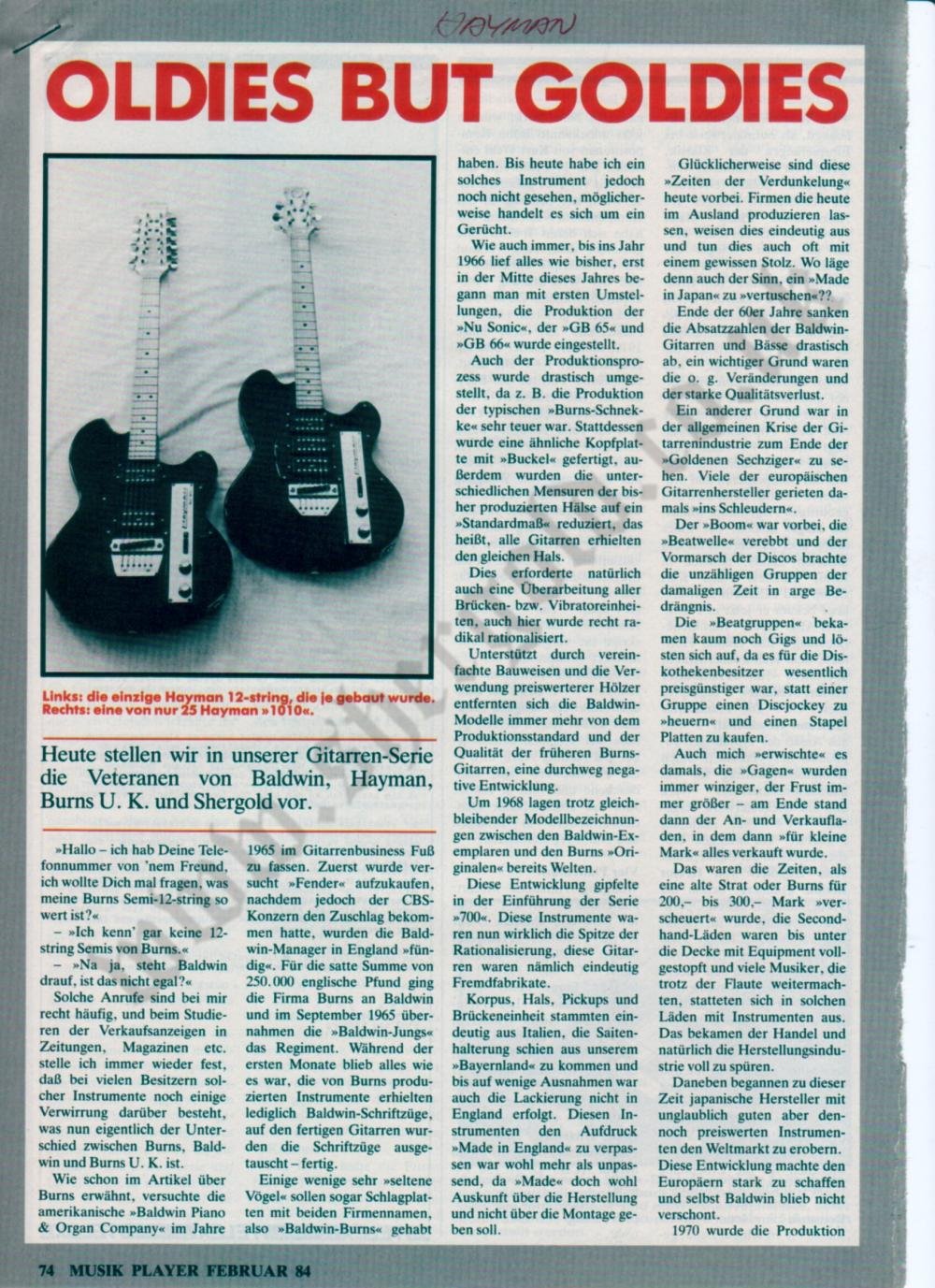